Hello all, It has been a real fun to develop my chatbot using Rasa platform! Thanks a ton for providing it!! So, after developing a basic chatbot and testing it on shell, I moved forward to install Rasa X in my system a couple of days back. But somehow I am facing some issues in working with Rasa X.

Following are the issues:

Since, except restart issue, the conversation flow and intent detection is working absolutely fine in shell, I guess it is the problem with the way I installed Rasa X. I installed it w/o docker by using command - pip install rasa-x --extra-index-url Simple Index Rasa X version: rasa-x-0.24.1 Rasa version: Rasa 1.6.1

Please help me out in solving this so that I can quickly move it to next stages.

Hi @Saylee . I have also been facing the same problem. It could happen that your custom actions are not returning properly, but since it is running alright in the shell, i have not idea what could be causing this issue.

Most of times I tried reloading the browser page(maybe more than once) and it worked for me, and when it didn’t, it was because there was something wrong in my actions.

Hi @Saylee and @varunsapre10! If you look at the Rasa X docs, we recommend that instead of using Rasa X locally, that you should deploy it to a server. You can find out the easiest way to do that here.

The pypi install that lets you run it locally is intended to just show you what Rasa X is quickly before you install it on a server. The reason we recommend deploying on a server is because Rasa X is intended to be capturing and collecting conversations users have with your assistant, so you can use those to improve. I recommend watching this video that goes into more depth about this.

Thanks for your response! So, I have started deploying Rasa X on windows server using Docker compose Manual installation steps. But I am getting this error - sqlalchemy.exc.OperationalError: (psycopg2.OperationalError) could not translate host name “db” to address: Name or service not known

Can you please help me out in this?

Hey @Saylee is this after completing all the instructions in the deployment? Could you show me the output of docker ps?

ps1363×44 3.01 KB
I scrolled up in the logs to see the root issue was failure in registering actions.actions Actually, I have used pandas library in my custom actions. But in docker, is not installed it seems as it is showing no module named pandas.

I am not sure how to install this package in docker image.

As for custom dependencies in custom actions, take a look here.

The command ‘docker ps rasa-production’ and other one also are giving an error.

sorry i meant docker-compose logs rasa-production, rather than docker ps. Ok it looks like the containers are up - do they stay up or are they restarting all the time?

Also, I ran the commands you gave just now. They show following issues: 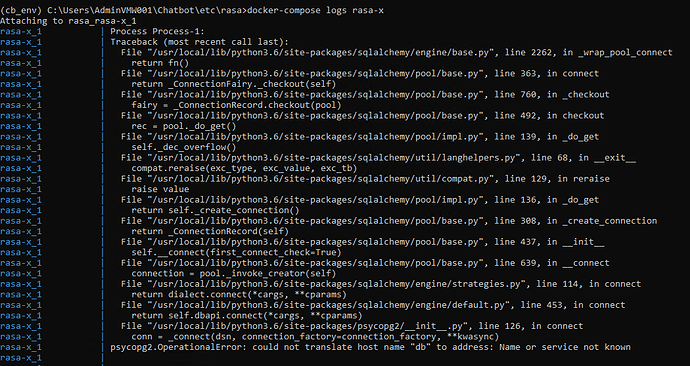 @Saylee could you post the output of sudo docker-compose logs db ? Seems like an issue with the db container since it’s restarting all the time. If you want, we can also arrange to jump on a call with you to help resolve these issues. Just send us an e-mail at support@rasa.com

@akelad The response for command is:

What version of Windows Server are you using?

@Arjaan or @akelad can I please get a response.

@Saylee this may be easier to resolve via call - if you email support@rasa.com, we can set up a call with you to help resolve your issues

The installation went all fine.

But I am facing the same issue which I was facing with pip installation!! The bot is detecting intents and actions correctly, but not responding

This is screenshot of a conversation at admin login:

linux_conversation1363×620 31 KB
It can be seen that actions are detected but NO RESPONSE.

This is screenshot from tester’s page: 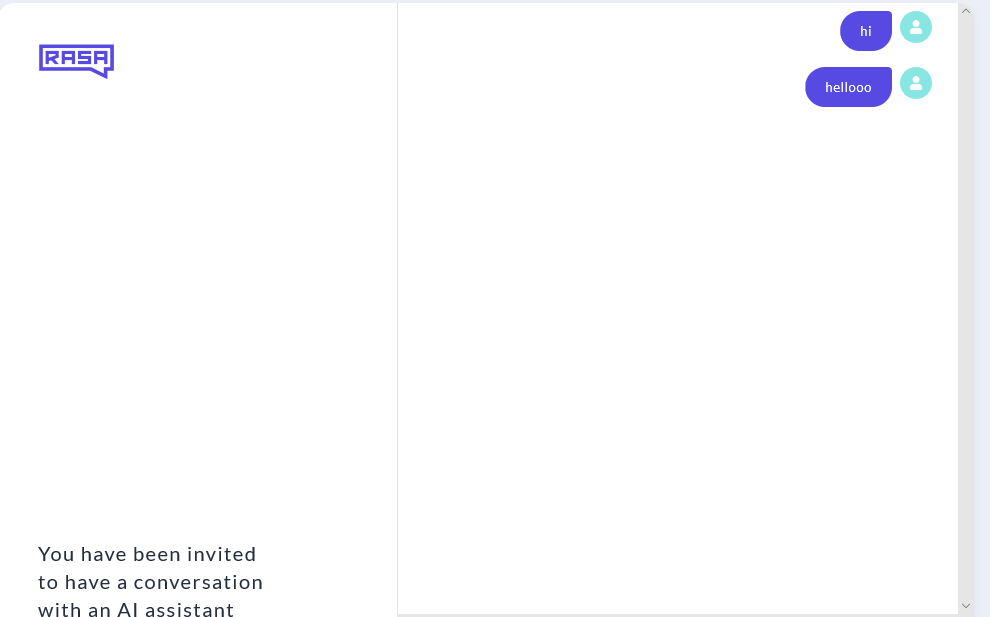 linux_tester990×617 6.52 KB
They get absolutely no idea whether the bot is doing anything or not!

Is is anything with compatibility issue of Rasa X and Rasa nlu?

Hey @akelad thanks for the support! And @degiz thanks a ton for helping over the call and solving issue!!

I am documenting the solutions you provided for people who might stumble across the same issues.

Root issue was that actions.actions was not getting registered.

And finally actions.actions got registered!! Yay!!

Then there was ‘File not found error’ for which I got a hint from this post. The problem was, my actions.py was using local files which needed to be included while forming image.

After successfully copying files in the image, then I faced issue with action server not running! So, I explored a bit more to find that my ‘endpoints.yml’ had an issue, it was pointing to localhost i.e. ‘http://localhost:5055/webhook’. The correct URL should be ‘http://<image_name_as_in_docker-compose.yml>:5055/webhook’ which, in my case was ‘app’.

And finallieee Rasa X is up and running flawlessly!!